The ancient Mediterranean populations, whose lives were tied to the sea, used to produce a golden fabric collected from the sea,
the subject of countless myths and legends:  the byssus filament. 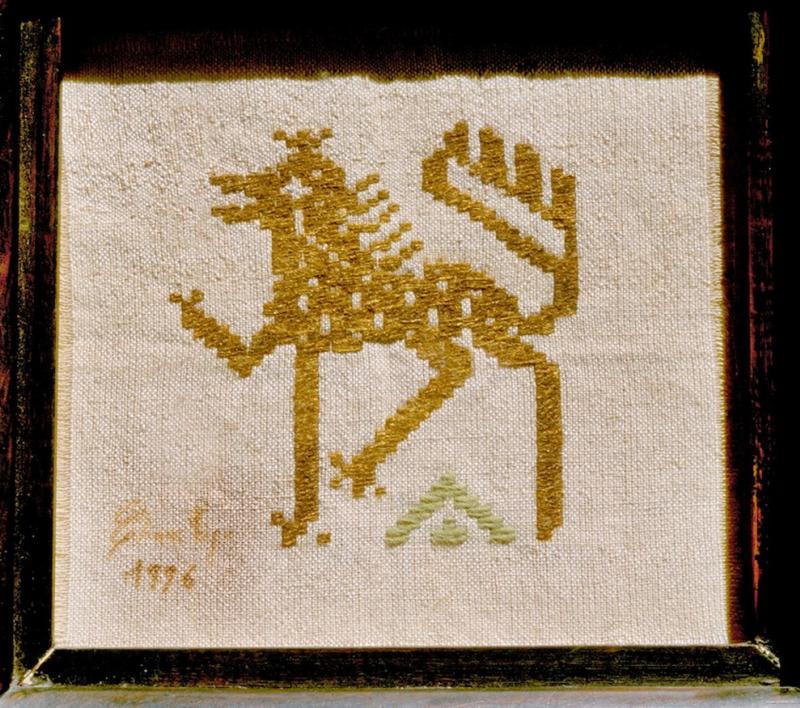 A SNIPPET OF HISTORY:

The industrious Cretans, the experienced Phoenician traders, the refined Chaldean weavers and dyers and the Egyptians, were the main protagonists of the millenary history of the byssus.
Jules Verne, one of the fathers of modern science fiction, was also particularly impressed by its charm: in “Twenty Thousand Leagues Under the Sea” he had Captain Nemo pronounce the words:
“The clothes she wears are woven with byssus thread obtained from certain shells and then dyed ancient purple”.

Sea byssus is a substance produced by  a shell (Pinna nobilis), the largest shell of the Mediterranean. It is a tuft of long filaments similar to silk which the animal uses to anchor itself to the seabed and was once collected together with the shell to produce the “sea silk”.

The production of byssus is an extremely laborious process and requires a number of processing stages. After collection it must be cleaned and combed several times, put to soak in lemon juice and finally hand-spun.

The most common processing was knitting garments such as  shawls, gloves, hats, gaiters, ties, etc. But the threads were also woven or embroidered on fabrics or processed in a special way to form a kind of fur.

The most important byssus collection and processing centres were located in southern Italy, especially in Sardinia and Apulia. 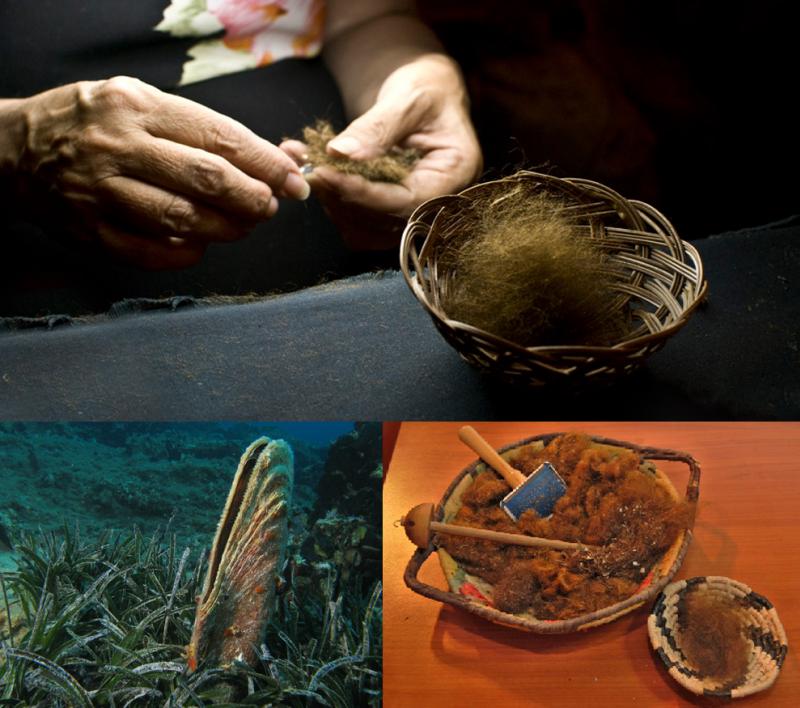 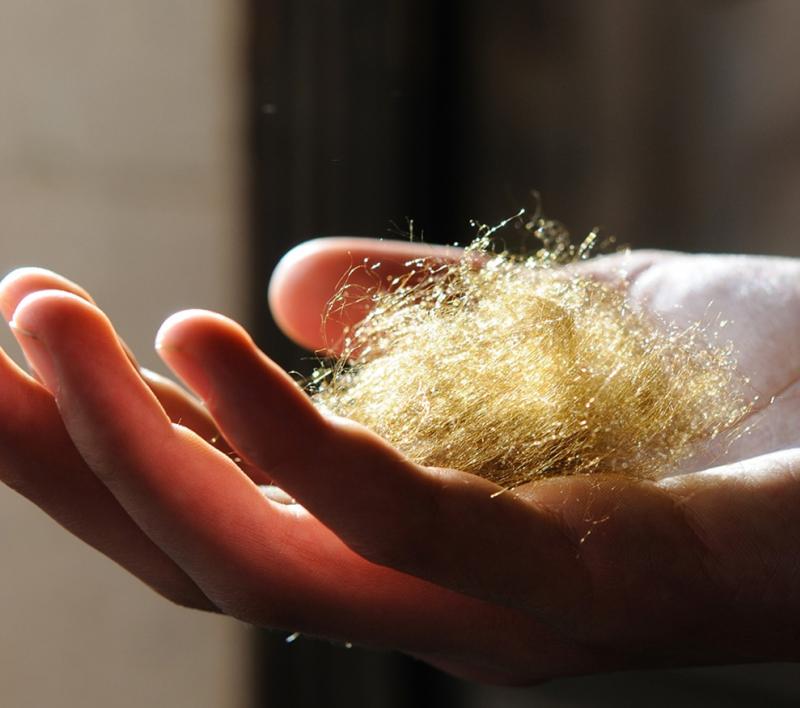 These artifacts had splendid golden hues and from ancient times they were highly sought after especially by the nobility and the high clergy. In the 19th century the byssus products just had to be displayed at the most prestigious trade shows such as the universal exhibitions in Paris, London and Vienna, where they were sold at extraordinary high prices and where prices reached 100 times that of wool (around 1,000 shells are required to obtain 1kg of raw byssus and produce 200/300 g of yarn: pure luxury).

Production continued to wane at the start of the 20th century, almost entirely disappearing after World War II because it was difficult to collect, the production process was long and demanding, in addition to the competition posed by silk and the invention of new synthetic materials.

Thanks to the collections of shells and their products by the naturalists back in the 1700s and 1800s, whose examples  created the first “natural science cabinets” from which many of today’s museums of natural history derive, today we are still able to admire some original artifacts.

It is virtually impossible to date and localise the production of sea byssus, because in ancient times the term “byssus” was used to indicate different prestigious fabrics (silk, cotton, linen), but it is certain that production was already taking place at least in Roman times.

However, despite the considerable amount of manufacturing in the past, very few objects have survived to the present day, and there are less than a hundred scattered in collections throughout the world. The oldest example is a hood knitted back in the 14th century, found during archaeological excavations at the Basilica of Saint-Denis, near Paris.

The Basel Museum is currently conducting research on byssus that aims to reconstruct the history of this material and create an inventory of the objects that still exist.

Although many objects have been lost, fortunately the byssus processing know-how has not yet entirely disappeared. In Taranto, in Apulia, and especially in Sant’Antioco in Sardinia, the interest in this traditional craft and cultural heritage has been steadily growing in recent years.

There are endless secrets regarding the production of this yarn, and not all of them are known. Chiara Vigo, a woman from S. Antioco, is the only Master in the world still capable of working it, and jealously guards the secrets which were handed down to her by her maternal grandmother Leonilde to whom she had sworn, as is the custom, that she would never have profited from the processing of the byssus yarn. Chiara Vigo thinks it is important to emphasise that ‘you can’t buy or sell byssus’, it is the heritage of all mankind, and must be made available to all mankind, especially to those who approach her with respect to go beyond the mystery of this fibre apparently so fragile and yet so strong.

Master Chiara Vigo has an extraordinary charisma, those who have met her have succumbed to the magical aura that envelops her person, her words and her gestures; there is something that goes beyond her very particular ‘craft”, there is an indefinable atmosphere in her eyes, as if her breath came from distant times, with its mysteries and its customs.

The songs she sings to the sea every morning at dawn are also mysterious, along with the words of the oath that her grandmother Leonilde made her pronounce, the ancient ritual and generational ‘hand-down’ of the secrets of the byssus , where the respect and ethics related to the possession of the artifacts are very strict; the words of the oath go like this:

Ponente, Levante, Maestro and Grecale
take my soul and
throw it in the sea bed
so  my life be
to Be, Pray and Weave
for all the people
that come and go from me
timeless, nameless, colourless, boundary-less,
money-less
in the name of the Lion of my Soul and
the Eternal Spirit
and so it will be.. “ 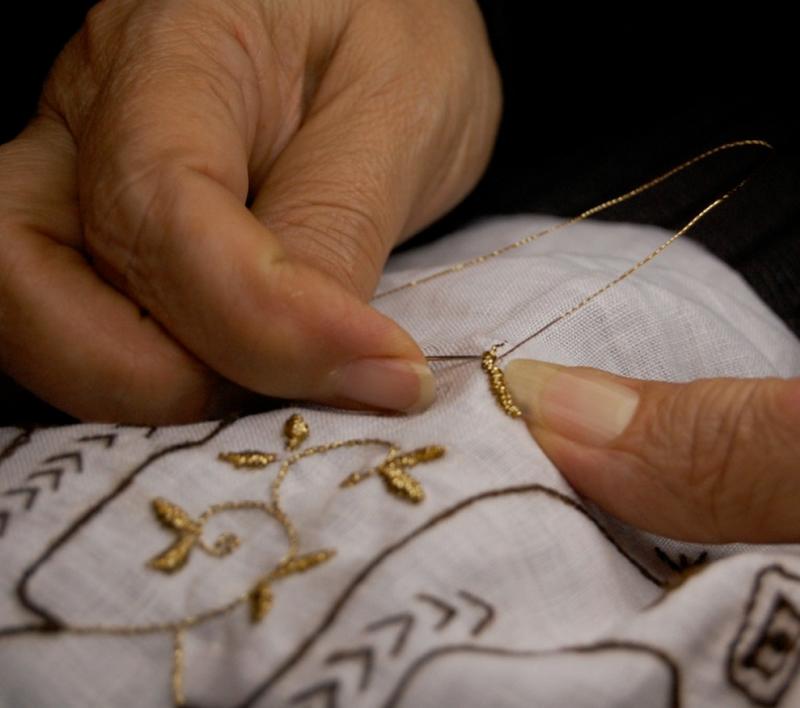